If you’re a small or midsize business (SMB) that does annual performance reviews, I have some terrible news. I don’t want to beat out around the bush, so I’ll just say it.

The Society for Human Resource Management (SHRM) suspected they were on their last legs back in 2015 before a number of sources officially called time of death earlier this year. A staple of performance management since the 1950s, gone forever.

Despite the fact that newsworthy names such as Netflix and GE have stopped doing them, WorldatWork found that 91% of businesses still conducted annual performance reviews last year—91%!

To paraphrase Mark Twain, it appears that reports of the death of the annual performance review have been greatly exaggerated. 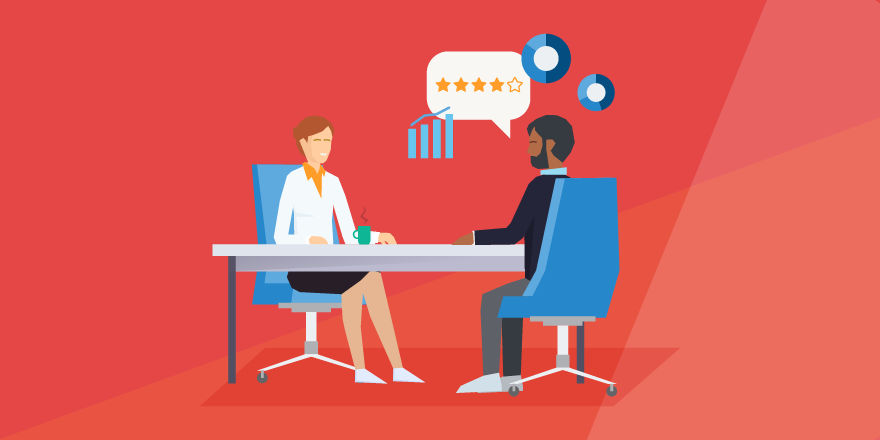 The truth is, annual performance reviews aren’t going anywhere anytime soon. They’ve become so ingrained in the corporate psyche that we predict at least 85% of businesses will still be conducting them in 2025—even if it’s just to do them.

Unless you have a stellar alternative in your back pocket, you’ll still be doing annual performance reviews too. So the real question is, how do we bring them back to life?

Close to two-thirds of employees and managers agree that the typical annual performance review process is outdated and ineffective—contributing to a poor employee experience. Unless you make important changes today, your workers will be checking a time-intensive box every year that makes little to no improvement on your business.

What should stay: Performance ratings

Performance ratings can seem reductive. For employees, it feels a little too much like school to have the totality of their performance boiled down to a single number or letter grade—especially one that might not be awarded objectively or consistently.

By removing ratings entirely, proponents say annual performance reviews will improve in a number of ways. Managers can have better conversations with their direct reports (who can focus on actual performance instead of ratings), employees don’t have to fret about their grades, and raises or bonuses can be doled out with more flexibility and nuance.

That being said, you really shouldn’t drop performance ratings.

According to research by CEB, now Gartner, when companies remove ratings from their annual reviews, employee performance drops by nearly 10%.

That’s not all. That same research found that eliminating ratings led to four additional unintended outcomes:

Ultimately, having a performance review without ratings is like having a report card without grades. They provide a useful guidepost for workers and an easy apples-to-apples comparison for managers. Keep them.

How software can help:  Once you’ve defined your ideal performance rating system and written out clear criteria for determining each grade, you can load it into a performance management system to ensure your managers are all using ratings consistently. In many systems, managers can simply pick their rating for each employee from a drop-down list.

What should change: Incorporate better sources of performance data

Even the most objective managers bring a slew of unconscious biases to annual performance reviews. Recency bias influences managers to focus too much on performance in the past few weeks, and not enough on stuff earlier in the year. Similarity bias says they’ll favor workers who are like them at the expense of those who aren’t.

When managers have only a single dashboard of metrics and their limited memory to rely on in annual reviews, these biases influence decisions. It’s no wonder then that 1 in 5 workers are minimally or not at all confident that their managers have enough information to adequately assess their job performance.

To mitigate biases and provide a more comprehensive picture of how an employee is really performing, SMBs should incorporate better sources of data in their annual reviews. Sources such as:

Having all of this data to work with, instead of their biased memories, will help managers immensely. Workers will also be more confident that their annual reviews accurately reflect the reality of their performance.

How software can help:  As data is collected in your HR system—when workers submit 360-degree feedback, when employees log notes from informal check-ins, when employees praise one another—it will automatically get attached to that specific employee’s profile. Come review time, managers only need to pull up the profile to have all of the data right there in front of them.

Recognize specific employees for their performance in Halogen Performance (Source)

When it comes to talent management, there may be no greater universal truth than the fact that defining goals for every employee is a total pain. It’s time consuming, the methods can be inconsistent from department to department, and employees can become disengaged if they don’t hit them.

Because one study shows that even without financial incentives to accomplish them, setting goals improves worker performance by 12 to 15% compared to situations where no goals are present.

To help, consider adopting a popular goal-setting model such as S.M.A.R.T. or OKR:

How software can help:  Goal-setting applications in performance management systems can help managers come up with better goals based on hard numbers rather than gut feel. Users can leverage benchmarking analysis or historical data to ensure goals are challenging, but attainable, and many systems can predict how altering goals will affect company performance. There’s even software built specifically to create and manage OKRs.

Create a new goal for individual employees, departments, or the company as a whole in Quantum Workplace (Source)

What should change: Get rid of performance improvement plans

What do you do with an employee who’s a low performer? You put them on a performance improvement plan: a document agreed to by the worker and their manager that defines the steps that the worker needs to take to get back in good standing.

Essentially a form of work-based probation, performance improvement plans have been an HR best practice practically since HR became a thing.

But should they be?

While the intention of a performance improvement plan should be to help struggling employees, the reality is that too often they’re a stopgap to letting someone go. Management isn’t laying out a plan for success, they’re building a case—and delaying the inevitable.

This makes performance improvement plans irrelevant for two reasons. First, at-will employment says that workers can be fired for any reason, as long as it’s not discriminatory. If you’ve communicated clearly that poor performance is the reason behind someone’s termination and already have the performance stats to prove it, you really don’t need to spend valuable time collecting additional “evidence” in a performance review plan (which doesn’t always provide legal protection anyway).

And second, if a performance improvement plan marks the first time that a worker learns they’re underperforming, it means you’re doing a poor job at giving employees visibility into their performance.

If you honestly want an employee to stay and improve, there are better tools at your disposal than a document that everyone knows is a precursor to being fired. Training sessions can give workers needed skills, workloads can be adjusted, and, most importantly, managers can have more frequent check-ins with their low performers to address any lingering issues.

And for those that should be let go, sometimes it’s better to cut your losses and move on.

How software can help:  Hiding performance metrics from workers until annual review time does no good for those eager to know how they’re fairing. Performance management systems give employees self-service access to keep track of their performance and leave feedback if managers point out any missteps throughout the year.

Workers can track their skills development in SkillsBoard (Source)

Is your technology (or lack thereof) to blame?

If there’s one idea that sums up this idea of breathing new life into stale annual performance review processes, it’s that the right technology is essential.

It’s not surprising that so many consider the practice dead when workers don’t have visibility into their goals, can’t easily leave praise or feedback for their co-workers, and can’t access the right tools that will help them perform better.

If you’ve been putting off upgrading your performance technology, it’s time to take action. Head to our performance appraisal software page right now to read real user reviews, compare features, and find a list of popular systems to begin your search.

Note: The information contained in this article has been obtained from sources believed to be reliable. The applications selected are examples to show a feature in context, and are not intended as endorsements or recommendations.

Brian Westfall is an associate principal analyst at Capterra, covering human resources and talent management. His research on the intersection of talent and technology has been featured in Bloomberg, Fortune, SHRM, TIME, and The Wall Street Journal, among other publications. When he’s not playing with his two corgis, he can be found traveling the world.